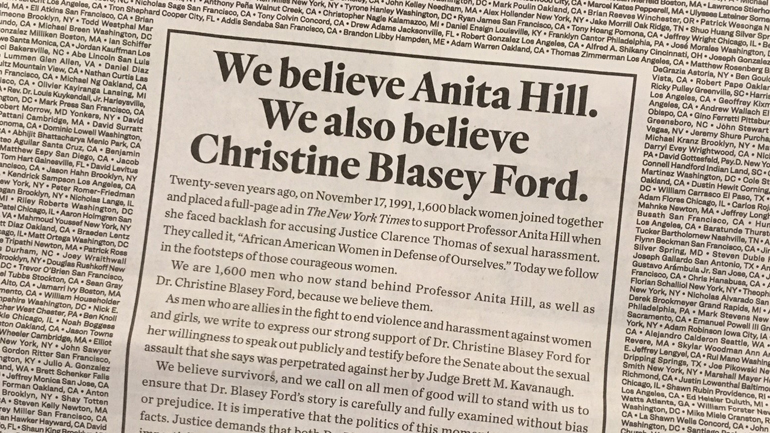 It’s Always Been a Scary Time

Since school ended in May, I’ve been in my own bubble trying to figure out my life. In the last several weeks, my feed was flooded with posts about “Dr. Ford” and “Kavanaugh”. I hadn’t the slightest idea who these people were, and I felt stupid for being so absent from the outside world that I didn’t know what was going on. I realized how privileged my life was, I didn’t have to pay attention to the news and I’d be relatively unaffected. However, a simple Google search of #IBelieveChristineBlaseyFord and #IBelieveAnitaHill made me realize that this affects me significantly.

I began to read up on the issue starting from President Donald Trump’s nomination of Brett Kavanaugh for the Supreme Court following Justice Kennedy’s retirement.

I read about Dr. Christine Blasey Ford: her story, her accusation against Brett Kavanaugh, and her request for an FBI investigation.

I watched her testify and recount her story, a story that so many of my friends have experienced. Many of them, like her, are still living with the trauma of what happened to them.

I watched uncomfortably as Kavanaugh dodged questions and acted inappropriately.

I saw other women come forward with accusations against him.

I read that Senator Jeff Flake was confronted by protesters in an elevator after he announced his support for Kavanaugh.

I was disgusted when Trump mocked Dr. Ford’s testimony at his rally in Mississippi and people cheered. “A man’s life is in tatters. A man’s life is shattered,” he said. But what about hers?

I was simultaneously shocked that despite everything that had happened, he still got enough votes to be confirmed and not shocked because of how society has treated victims. Our own president openly derided Dr. Ford and people clapped and cheered. He also stated how it’s “a scary time for young men in America.”

For as long as I can remember, my mom has told me to:

Among dozens of other rules. I thought she was worrying unnecessarily in high school, but when I got to college, after hearing and reading about so many experiences, every single one of these rules started making sense. These thoughts never even cross the minds of my male friends because they never have to think about it. It has always been a scary time for women everywhere.

I was uneasy all weekend, but seeing the influx of posts reminding others to register before the deadline and businesses offering free food/drinks for those who register was inspiring. There are some who say that things like this are out of our control, that it’s just the way it is, but that’s precisely why we should go out and vote.

At a voter registration rally in Las Vegas, Michelle Obama said, “While some folks are frustrated and tuned out and staying home on Election Day, trust me, other folks are showing up. Democracy continues with or without you.”

I’ve voted several times before, but it is just now dawning on me how important it is to pay attention to politics because it affects us more than we think.

View all posts by helloitsrena

Hey y’all, I’m Rena and this is my blog! I’m currently living the dream as a second year medical student. Despite having been in several pre-med organizations, I wasn’t blessed with the best mentors and advisors throughout my journey to get where I am today.

Looking back, there was so much I wish I had known. Because of this, I’d like to be there for others who are in need of a little guidance from school things to adulting things. Hopefully you can learn from my experiences to save yourself time and money.

Aside from med school musings, I also dabble in sharing food, travel, and general life thoughts. I hope being here is as helpful for you as writing it is for me. Cheers!